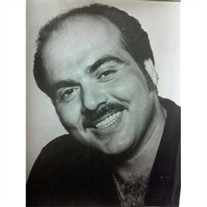 Anthony Tony Munafo, age 69, of Forked River, passed away Thursday, Dec. 18, 2014 in Toms River. Born and raised in Patterson, he lived there before moving to Forked River in 1974. Tony owned and operated Tonys General Merchandise in Forked River since 1979. Previously, he worked for Ward Trucking Company and was the owner of a Check Cashing Store, Star Limousines and She-Jen Security. Tony was also an actor, a body guard, and a movie producer. Predeceased by his parents, Anthony and Rose Munafo, Tony is survived by his 4 children Cindy Abrams, Anthony and his wife Michele, Gina Munafo, and Jonathan Munafo all of Lacey; his brothers Frank and Eddie, his sister Lena Meola; and his 4 loving grandchildren, Amanda, Crystal, Olivia, and Angelo. Tony is also survived by his former wives, Marion and Laurie, and many nieces, nephews, relatives and friends. Relatives and friends may visit from 2-4 and 7-9 on both Sunday December 21, 2014 and Monday December 22, 2014 at Lacey Memorial Home (formerly Growney Funeral Home) 1022 Lacey Road Forked River, NJ 08731. A Funeral Liturgy will be celebrated on Tuesday, December 23, 2014 at 9:30am from St. Pius X Roman Catholic Church, Forked River. Entombment will follow in Ocean County Memorial Park Mausoleum, Waretown. Laceymemorial.com

The family of Anthony Tony Munafo created this Life Tributes page to make it easy to share your memories.

Send flowers to the Munafo family.