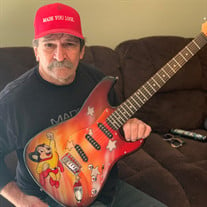 Dennis Jude Kline of Toms River, NJ passed away on Thursday, March 24th, 2022. He was the son of Kenneth Chester Kline and Claire (Wissel) Kline. He is survived by his (3) daughters Eyrhen Cohen of Wall, Jayme Addesso of Toms River, Morgan Kline of Wall, and his son Kenneth Kline of Toms River. He is also survived by his brother Kevin Kline and sisters Lara Voss, Patricia Kline, and Kathy Surace as well as his ex wife Brenda Kline and his 9 grandchildren. Dennis was born in Plainfield NJ but lived in Toms River most of his adolescence. He was often found with a pencil in his hand creating some of the most enamored and prolific art that evolved into becoming the renowned air brush artist in the rock and heavy metal music industry of the 80s and 90s. He was the self proclaimed inventor of the air brush art you have come accustomed to since the 70’s. His fans and followers would agree. Dennis’ creativity was limitless. His name adorns some of the greatest rock bands of our era. Although there are thousands of guitars to list, his most renowned are the “Marilyn” and “Theater of Pain” made famous by Motley Crue. He went on to paint several more for the Crue with the Nikki Sixx “Skull” bass and Mick Mars’ “Mars” “Dalmation” and 2 versions of the iconic “Girls, Girls, Girls” guitars, a portrait of desire on the bedroom walls of rock music fans across America. Once word got out, the “Godfather of Graphic Guitars” went on to paint for The Rolling Stones, Great White, Zakk Wylde, Twisted Sister, Alice Cooper, Jon Bon Jovi, Nelson, Cinderella, White Snake, Skid Row, Trixter, Howard Stern, Bruce Springsteen, as well as for the largest rock radio station in the world, at the time, WNEW with Scott Muni. He grandfathered the trend during a 10 year reign contracting guitar graphics for Kramer, CBS Records, ESP, Guild, and several smaller, local brands like Fernandez and Custom Dreams. When he wasn’t painting guitars, he was applying his manifesto’s on cars, trucks, vans, motorcycles… you name it… it had a Kline. He traveled the United States with several carnival brands blanketing backdrops with scenes of the frozen tundra for the Himalaya circular coaster, eerie scenes on Fun house walls, and tasty depictions on all the concession stands. His most recent years were spent with unending down time following his passion to paint anything and everything all while spending time with his kids and grandkids. A memorial will be held on Friday, April 1st from 3:00 to 7:00pm at the Toms River American Legion located at 2025 Church Rd, Toms River, NJ 08753. A service will occur at 5:00 followed by a motorcycle tribute, another passion of Dennis’, at 6:00. WE WILL MISS DENNIS...HE WAS ONE OF A KLINE.

Dennis Jude Kline of Toms River, NJ passed away on Thursday, March 24th, 2022. He was the son of Kenneth Chester Kline and Claire (Wissel) Kline. He is survived by his (3) daughters Eyrhen Cohen of Wall, Jayme Addesso of Toms River, Morgan Kline... View Obituary & Service Information

The family of Dennis Jude Kline created this Life Tributes page to make it easy to share your memories.

Send flowers to the Kline family.