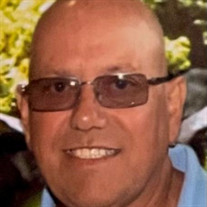 John C. Harper, 64, of Toms River passed away peacefully on Tuesday March 29, 2022, at Southern Ocean Medical Center, Manahawkin. Born in Hackensack on March 3, 1958, he was the son of John Harper and Diane Cartwright. Upon graduating from Bogota High School, John enlisted in the Army to serve his Country. In 1987 he transitioned into civilian life and turned wrenches for the Bergen County Police Department until he became a Fort Lee Police officer in 1995. A United States Army veteran, he served 11 years on active duty and joined the National Guard. He served with the National Guard in Operation Desert Storm. John retired from the Police Department in 2003. Retired life was not for John, so he returned to work at the Ocean County Road Department as a Principal Traffic Analyst and retired in January 2022. Along the way, John created lifelong friendships and was always willing to lend a hand. He could always be found tinkering or fixing something. He loved to restore cars and would constantly be working on his beloved classic cars including his 1965 Thunderbird and his 1937 Chevy. He was a master at party prepping and would take over and make sure a gathering was top notch. He loved to cook, playing golf, Notre Dame Football, being at the lake with Glady and spending time with family and friends. He will be forever missed. He is predeceased by his father John A. Harper. He will be fondly remembered and missed by his mother, Diane Cartwright, his fiancé, Glady Goehringer; his three children, Jennifer Pam Harper, John Harper and Brittany Potter and her husband Wesley. He loved his grandchildren, Phil Harper, and Emma and Amelia Farrell; his siblings, Helen Howell and her husband Michael, Bonnie Abad, Chris Ann Harper- O'Connor and her husband Hugh; Frank Cartwright and his wife Cindy, Thomas “Ted” Doherty and his wife Gail, Scott Doherty, and Anthony Salvaggione, who was more a brother than a friend; as well as too many aunts, uncles, cousins, nieces, and nephews to mention. In lieu of flowers, memorial donations may be made to Dyberry Day Camp, c/o Elizabeth Baerenklau, 9 Castle Hill Road, Beach Lake, PA 18405, Valley Central Education Foundation, PO Box 656, Montgomery, NY 12586 as he supported both organizations or a charity of your choice. A memorial gathering to remember and celebrate John’s life is being arranged. Details will come through family and friends. Internment of cremains will take place at Arlington National Cemetery, Arlington, VA at a future date.

John C. Harper, 64, of Toms River passed away peacefully on Tuesday March 29, 2022, at Southern Ocean Medical Center, Manahawkin. Born in Hackensack on March 3, 1958, he was the son of John Harper and Diane Cartwright. Upon graduating from Bogota... View Obituary & Service Information

The family of John C. Harper created this Life Tributes page to make it easy to share your memories.

Send flowers to the Harper family.