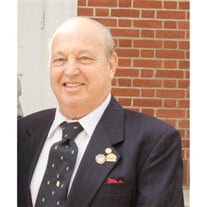 Joseph John Venneri, 81, died Friday, June 28, 2019, at Hampton Ridge Rehabilitation Center in Toms River, NJ. He was born and raised in Brooklyn, NY on July 28, 1937 to Angelo and Louise Venneri. A beloved father and grandfather, he leaves his daughter Jeanna Marie Cavanaugh, age 48 and son Christopher Louis Venneri, age 39, his four grandchildren Andrew, age 14, William, age 10, Christopher, age 5 and Matthew, age 1. Joseph had a passion for music. An accomplished musician with a long recording engineer career, he owned and operated recording studios in NJ, NY, PA and TN, where he produced many top artists, including, but not limited to, The Weather Girls (Its Raining Men), Tommy James and the Shondells (Mony Mony), The Chiffons (Hes so Fine), Jeanne C. Riley (Boots are made for walking), The Loving Spoonful (Daydream), and many others. Joseph also was an original member (guitarist) of The Tokens, which included the number one smash hit The Lion Sleeps Tonight. In addition, he was an accomplished master in Goju-Ryu style, earning a 6th degree master black belt and taught many students. Joseph lived the most interesting life, to the fullest and always smiled. He traveled and toured the world and was happiest when he was in the recording studio and playing guitar. At Josephs request, no public services will be held. He will be cremated and a private service will be held for immediate family. Condolences may be sent to 26 Harness Lane, Marlboro, NJ 07746.

The family of Joseph J. Venneri created this Life Tributes page to make it easy to share your memories.

Send flowers to the Venneri family.