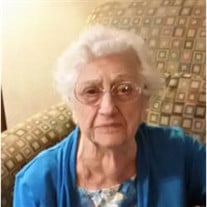 Lena Daidone of Lakeway TX died on October 13, 2016 at the age of 101. Lena was born of Italian immigrants living in Newark, NJ and lived a long and happy life. Her father Pasquale Attanasio was a shoe-maker with his own shop. Lenas mother Antoinette (Cerqua) was at home with the family consisting of Joe, Nick and Gerard. They all lived in the back of the Shoe Shop in a small room for a few years until purchasing a multi-family home in Newark. Lena met her husband Leonard (Leo) Daidone while working as a seamstress in a factory in Newark. They kept company for many years and finally marring on October 6, 1940. A few years later the first of three sons were born; John. Not long after came Gerardo and then Leonard. Lena loved to cook, knit and crochet. She spent her younger years in the kitchen most days and in her later years producing many, many hats, scarves and blankets. While in TX she made dozens of hats and scarves that were given to Homeless by the local Loaves and Fishes ministry. Lena leaves behind her son; John and his wife Laura (NJ), Gerardo and his wife Fran (PA) and Leonard and his wife Lisa (TX). In addition, she leaves behind eight (8) grandchildren and eight (8) great-grandchildren. In addition, during her many years on this earth she has graced many friends and acquaintances with her kindness and charm. Lena made many close friends in New Jersey, Pennsylvania and Texas. Lena will be missed by many however her memory will last forever in everyone she touched. We should rejoice with her passing because she is now at rest with her family in heaven. She longed to be with them for many years and she finally has achieved her desire. Relatives and friends may attend a viewing on Friday, October 21, from 8am until 10am. A mass of Christian Burial will be celebrated on Friday at 10:30am at the Church of St. Pius the Tenth 300 Lacey Road Forked River. Entombment will follow in Ocean County Memorial Park, Toms River. In lieu of flowers, please send contributions to St. Jude Children Hospital in memory of Lena Daidone.

Lena Daidone of Lakeway TX died on October 13, 2016 at the age of 101. Lena was born of Italian immigrants living in Newark, NJ and lived a long and happy life. Her father Pasquale Attanasio was a shoe-maker with his own shop. Lenas mother Antoinette... View Obituary & Service Information

The family of Lena Daidone created this Life Tributes page to make it easy to share your memories.

Send flowers to the Daidone family.